Ukraine latest: The UK will soon have trained the equivalent of half the British Army

More than £2.3 billion in military aid has already been given

On Thursday Ben Wallace, Defence Secretary, visited the latest cohort of Ukrainian soldiers taking part in a major new UK-led military programme, which will train a further 10,000 Ukrainians over the coming months.

This builds on the training already given to 22,000 Ukrainian troops since Putin invaded Crimea, on top of the cutting-edge weapon systems the United Kingdom has supplied. It completely dwarfs the EU’s response.

We have analysed the latest figures from the Ministry of Defence (MoD) which were published just over two weeks ago on 23 June 2022. These show the numbers of personnel in the various branches of the armed forces, as well as those in the Volunteer Reserves.

The figures below show the numbers of personnel in the regular Army, excluding the Volunteer Reserves

In the coming weeks the UK will have trained the equivalent of half the British Army’s combat-ready troops.

The UK has a long history of supporting Ukrainian service personnel through Operation ORBITAL, which trained 22,000 Ukrainians between 2015 and 2022. The new programme will build on this success and demonstrate the UK’s continued leadership in responding to Ukraine’s military requirements as the war evolves.

The programme is part of the UK’s enduring commitment to support Ukraine in its fight against Russia’s unprovoked invasion, which so far amounts to more than £2.3 billion in military aid and includes more than 5,000 NLAW anti-tank weapons and M270 multiple launch rocket systems. 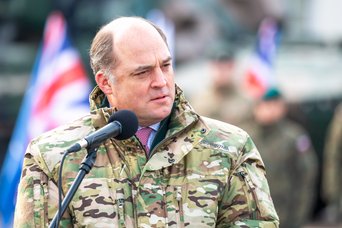 “This ambitious new training programme is the next phase in the UK’s support to the Armed Forces of Ukraine in their fight against Russian aggression. Using the world-class expertise of the British Army we will help Ukraine to rebuild its forces and scale-up its resistance as they defend their country’s sovereignty and their right to choose their own future.”“The training will give volunteer recruits with little to no military experience the skills to be effective in frontline combat. Based on the UK’s basic soldier training, the course covers weapons handling, battlefield first aid, fieldcraft, patrol tactics and the Law of Armed Conflict.“The Government has rapidly procured AK variant assault rifles for the training programme, meaning Ukrainian soldiers can train on the weapons they will be using on the front line. This effort was supported by the Welsh Guards, who tested more than 2,400 such rifles in 17 days to ensure they were ready for the Ukrainians to commence their training.”

The UK is not only doing the job for Ukraine, but for the EU itself

To give some idea of the scale of the UK’s support in defending the EU, we have obtained pictures of the latest British deployment of British Challenger 2 tanks to eastern Poland. These come via the ‘Ministerstwo Obrony Narodowej’ – Poland’s Ministry of National Defence – on Friday (08 July 2022). 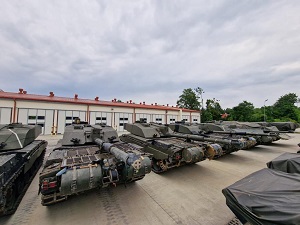 The tanks are from Squadron A of the Queen’s Royal Hussars.

This is yet one more demonstration of the ways in which the United Kingdom is still playing a leading role in the defence of the EU which it technically left on 31 January 2020. Still no thanks from the EU Commission.