Proud to be British : The eight young men who stood tall for Her Majesty

2,702 military personnel were majestic yesterday – but eight stood out

CIBUK.Org pays tribute to the role of the men and women of the UK’s armed forces

Yesterday was an emotional day for millions of people, not the least of whom being His Majesty King Charles and the members of the Royal Family. However, eight young men serving the Crown carried an additional burden.

Amongst the 2,702 military personnel who took a public role in the greatest state funeral the world has ever seen – and the thousands more in the armed forces who backed them up – eight Guardsmen took on the heaviest responsibility.

These eight young soldiers were talismans for the entire contribution of the armed forces in making a sad day special and we pay tribute to them and to all those who took part. 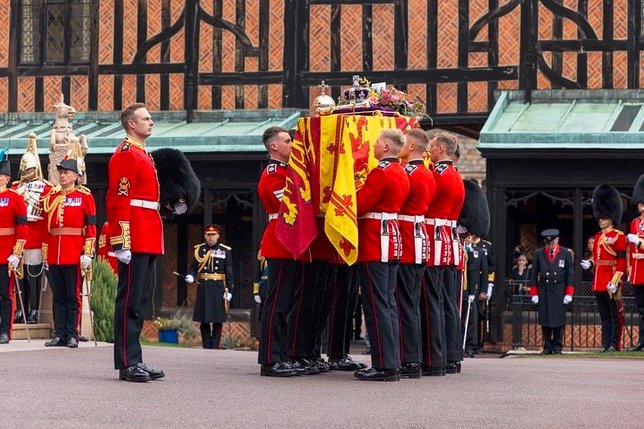 In this article we refer to eight Guardsmen but in fact the bearer party totalled 12. We are singling out the eight because they bore the heaviest burden in every sense.

As the serving monarch, Her Majesty Queen Elizabeth II held the position of Company Commander of the Grenadier Guards’ Queen’s Company.

The Grenadier Guards’ relationship with Her Majesty The Queen during her remarkable reign was a special one. Whilst the troops of the Household Division were charged with guarding Her Majesty and her palaces through her reign, it is the Queen’s Company who oversee the transition from one monarch to the next and undertake the exceptional role of guarding Her Majesty’s body in death too. Their 12 very best soldiers were selected to provide the bearer party at Her Majesty’s funeral.

The officers and the pall bearers performed their duties with precision and respect.

These are real soldiers who go into combat

There will no doubt be millions of people around the world who think that the military personnel they witness on occasions like this have only ceremonial duties. This is emphatically not the case.

The Guardsmen who carried the Queen’s coffin yesterday are active soldiers who were called back from duties in the Middle East for this sombre duty. They then rehearsed day and night until they were able to carry out their duties to perfection. And perfection it was.

About the Grenadier Guards and their defeat of the French

The Grenadier Guards, as the most senior regiment of Foot Guards, have a rich history. They were formed as a Royalist Regiment in 1656 while King Charles III’s preceding namesake – King-in-Waiting Charles II – was in exile in Bruges after the English Civil War.

Previously, it had only been the Grenadier Company of the First Regiment of Foot Guards that wore the bearskin caps. This was a move that was subsequently embraced by all the British Foot Guards Regiments.

For the original version of this article, click here: https://facts4eu.org/news/2022_sep_standing_tall