EXCLUSIVE: “Yes, I do think the EU is a basket case” – leading US commentator

This report has been co-published with our affiliated organisation, Brexit Facts4EU.Org.  We are most grateful for their work.

Challenging topics, important people from the UK and around the world

Video Interview No.1 – From Washington DC, Dr Nile Gardiner of the Heritage Foundation.

CIBUK is pleased to publish the first in a series of exclusive video interviews with significant figures from around the world, as well as from the United Kingdom. The topics will vary according to the person we are talking to but will broadly encompass Brexit, personal freedoms, independence, sovereignty, and the UK’s place in an ever-changing world.

Our aim is to stimulate readers with the views of significant individuals from the UK and internationally. Sometimes these will be with politicians, sometimes with notable opinion formers.

We start in Washington DC. Our second interview next week is with an MP from New Zealand. The videos will also be published on the CIBUK.Org website and will be shared on YouTube.

The exclusive and inaugural video interview is with Dr Nile Gardiner of the Heritage Foundation in Washington DC.

Nile is British but has lived and worked in the political hotbed of Washington DC for 20 years. He also has significant previous experience working in Lady Thatcher’s Private Office as an aide to the late Iron Lady herself. In the interview below he speaks about the EU (“a basket case”), the Biden administration (“no love lost with Boris”), as well as spilling the beans on his time working for Lady Thatcher.

Here are just some of the highlights from this stimulating interview:-

To watch the full interview click on the image below.
This is also available on YouTube here: https://youtu.be/PfcMxmER9zg?t=119 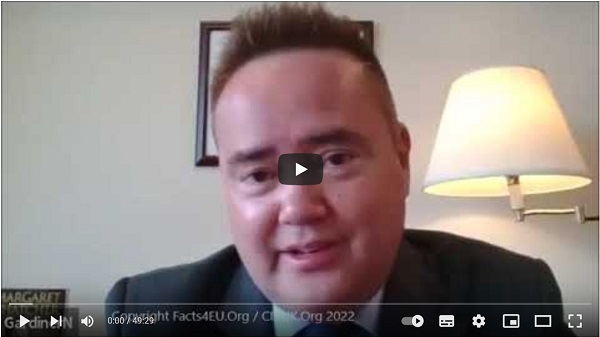 CIBUK.Org and Facts4EU.Org are grateful to Dr Nile Gardiner of the Heritage Foundation for his time. To have a perspective of the United Kingdom and its place in the world from a Washington perspective is useful, we believe.

Dr Gardiner is our first interviewee in this series. Our next interviewee is an outspoken MP from the New Zealand parliament and we plan to publish this by the end of next week.