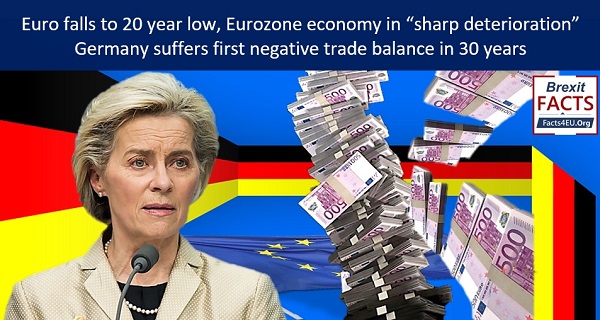 Euro drops another 1.65% in one day – approaching worst level since launch in 1999

Whilst the BBC and Sky News focus on the travails of the Prime Minister, the EU is going through woes of its own.

Whilst they are always keen to report on negative economic news from the UK, British broadcasters might like to take a look at what’s happening on the other side of the English Channel. In the absence of them doing this, Facts4EU.Org thought readers might wish to see how bad things are getting ‘over there’. 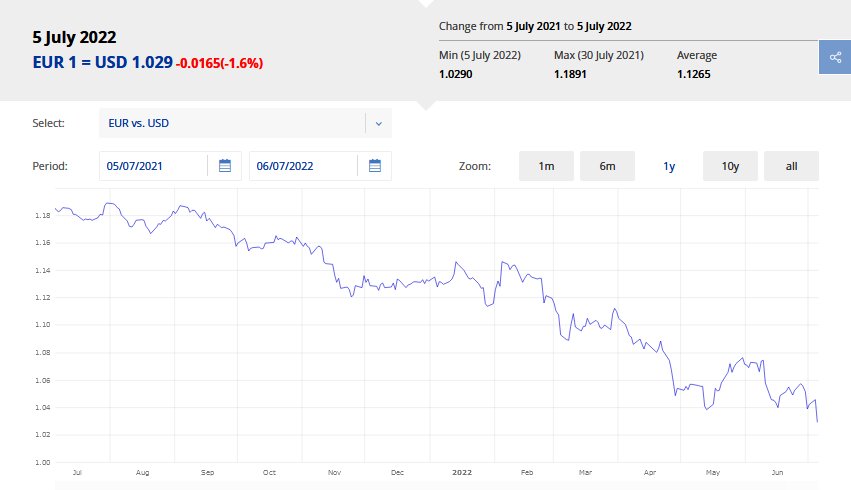 1. The Euro continues to tumble

According to the European Central Bank’s official figures, the Euro has now fallen 13.1% in the last 12 months. Taking just the last five months, the Euro has fallen in value by 10.1%.

Currency markets can be volatile but there is no doubting the downward trend.

The Eurozone Composite PMI® (Purchasing Managers’ Index®) is produced by S&P Global and is based on original survey data collected from a representative panel of around 5,000 manufacturing and services firms.

It is a highly respected and up-to-date measure of business confidence and expectations in the Eurozone. And the news issued yesterday is not good. Here is Chris Williamson, Chief Business Economist at S&P Global Market Intelligence.

Respected economic forecast for the Eurozone

“The sharp deterioration in the rate of growth of eurozone business activity raises the risk of the region slipping into economic decline in the third quarter. The June PMI reading is indicative of quarterly GDP growth moderating to just 0.2%, with forward-looking indicators such as the survey’s new orders and business expectations gauges pointing to falling output in coming months.

“The manufacturing sector is already in decline, for the first time in two years, and the service sector has suffered a marked loss of growth momentum amid the cost of living crisis. Household spending on non-essential goods and services has come under particular pressure due to soaring prices but business spending and investment is also waning in response to the gloomier outlook and tightening financial conditions.”

Finally, are the wheels coming off Germany’s Mercedes?

One of the many official sources we monitor is Germany’s official statistics agency. On Monday they produced their latest trade figures for May. These show a trade deficit for the first time in 30 years.

And out of interest for British readers, Germany’s exports to the UK fell by 2.5%. This compares with Germany’s sales to Putin’s Russia, which actually rose by an astonishing 29.4% – despite the EU’s sanctions. 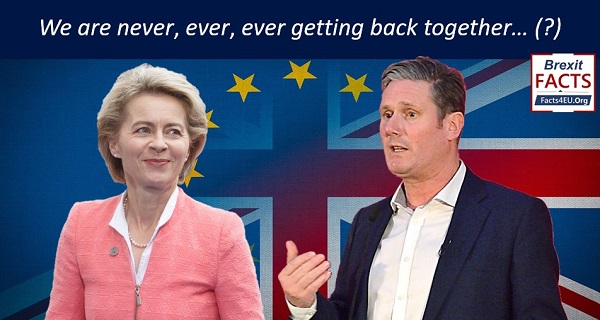 Starmer: “Under Labour, Britain will not go back into the EU” - Really? 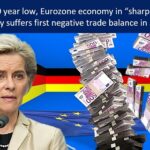